Posted by photodivauk on December 20, 2012
Posted in: Dartford, Football, Sport. Leave a comment

It was a muddy affair, and the light drops off pretty quickly by the second half in December. A meagre pre-Christmas gate of 926 forgot the nasty nip in the air and warmed to Darts’ bright start in what could have been a difficult tie. The Tonbridge Angels met their match at Dartford FC in the second round of the FA Trophy games. The FA Trophy Prize Fund payouts for this year’s 2012/13 Carlsberg Trophy.

Amounts are per club in each round. Numbers in brackets represent the number of winning clubs per round

Dartford Manager Tony Burman is well aware of the importance of The Trophy, having played in the competition when former England senior and Under-21 manager Taylor was in charge. “I’ve been fortunate enough to go to the Semi-Final with Dartford and they still talk about The Final in 1974.

“This is a competition where two non-League clubs are going to get to Wembley and that’s the challenge for everybody who’s still left in the competition. I want to go all the way.”

Dartford have not had a great week in the league, though, with three defeats in seven days.

“We played reasonably well in the games even though we lost them but that is because of the calibre of the league we are playing in,” added Burman. “It just shows how easily things can change”

Dartford are currently sixth in the Conference Premier having been promoted from the Conference South last season and Burman is delighted with their progress so far this year.

“We shouldn’t try to run before we can walk but we’re walking very quickly at the moment! “To be sixth in the league is a fantastic achievement but our ambition is to finish as high as we can.”

Tonbridge opened well enough but recent Dartford defensive frailties were absent and the Angels were stung by an early opener from the hosts. Jacob Erskine’s header had already tested the visitors and on six minutes Tonbridge’s defence was prised open as Ryan Hayes fed Harry Crawford, who easily beat Lee Worgan to give Darts the lead. Despite the setback Tonbridge stuck at it but they tended to make the obvious passes in contrast to, in particular, Ryan Hayes, who skinned one-time Darts trialist Harry Muggridge on the inside and the outside. 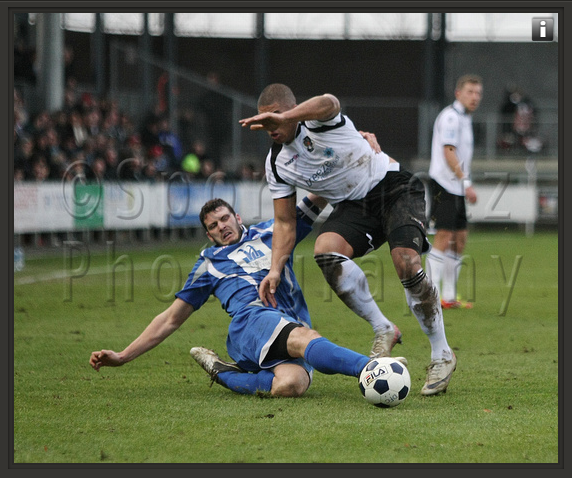 Tonbridge also needed an Erskine type. Frannie Collin didn’t really live up to his reputation as a goal-scorer for Angels and the home back four had a welcome quiet afternoon.
Six minutes after the interval it was game over as top-scorer Crawford was clean through an invisible Angels, only to be pulled down by Tom Davis. Up strode skipper Elliot Bradbrook to smash the penalty kick irrevocably past Worgan. There was no way back for the visitors and they were finally put to bed by as good a goal you’d see anywhere when Jon Wallis unleashed an unstoppable 30-yard stunner to round off a flowing four-man move in which Erskine provided a cheeky back-heel for the Wallis collection.

All in all this was a comfortable afternoon for Dartford, with few injury worries and a place in the last 16 booked……  Are the Trophy glory years of the 1980s returning?

Draw for the third round happens on Monday, so we wait to see who Dartford draw. Update:-  Dartford play Bromley, Welling, other local rivals, play Grimsby Town. I see Tamworth are still contenders. Another meeting with Dartford could be very interesting.