Dartford had a disappointing match result at Grimsby, losing 3:0 to make this second leg today a really uphill struggle. Grimsby’s home stadium is actually in neighbouring Cleethorpes, so it is often joked by locals that it is the only British club that plays away every game. They were relegated from the League in 2010  and look set and determined to reestablish themselves. Still, after that fateful match, Grimsby managed to lose 2:0 to Braintree, so they are as beatable as any other team in the league. Grimsby Town are top of the Blue Square Premier league at present, so they are no walkover. To make a comeback from the -3 goal start, Dartford will have to pull out everything, and let’s hope the supporters are behind them big time. Whatever the result, there’s no doubt that Dartford FC will have given every ounce of energy and determination. 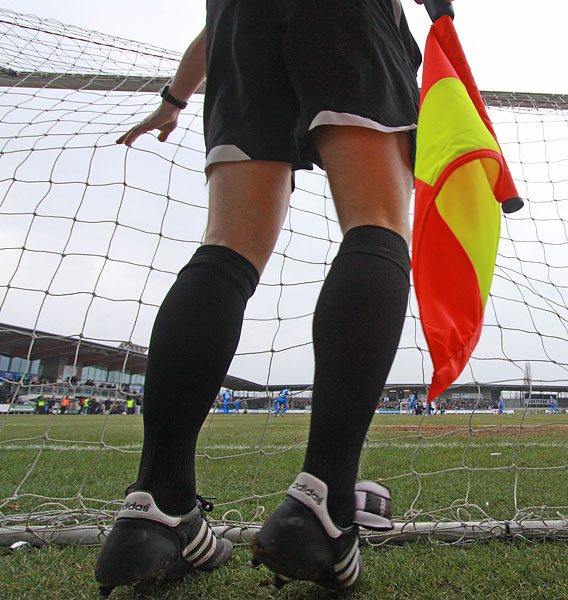 Should be ‘Assistant Referee’s Legs’ but it doesn’t sound as good. Taken via the remote as I was in the distance on the halfway line waiting for the teams to come on the pitch. More luck than judgment I am afraid, but a novel view.

The gentleman of the press

There was a good turnout of press snappers, including the three regulars here. There were a couple down the other end of the pitch, myself, and one other just out of shot. Not a bad number.

As it turned out, the Grimbarians came in hordes, not unlike their Viking ancestor, Grim the Dane, who founded the original village of Grim’s by. They came to party, were loud and enthusiastic. Just as well they were segregated.

Harry the Haddock comes to Dartford

Harry the Haddock belongs to ‘Billy’ and for some strange reason has been taken to various away matches. Takes all sorts, you might say.

Dartford played strongly, were denied several opportunities at goal by a determined Grimsby defence. And so it ended 0:0 and Grimsby Town go on to Wembley. I hope their success continues. Dartford FC gave their all, and made an entertaining game in the cold. My hands felt  like a pack of frozen fish fingers at the end…