Posted by photodivauk on August 26, 2014
Posted in: Uncategorized. Leave a comment

I was watching an episode of Saturday Kitchen Live and was captivated by Rachel Khoo and her tiny Paris kitchen and was watching her create a ‘croque madame’ for breakfast. So I decided to try. I made a bechamel sauce with a tablespoon of butter, a tablespoon of flour and 200ml milk. Use a whisk in the pan to bring it all together and stop it getting lumpy. I added a teaspoon of French mustard and a little grated nutmeg, as per the video. Then I grabbed the ubiquitous white sliced loaf – presumably not that easily obtained in Paris! I cut the crusts off two slices and got the rolling pin out and and flattened them out to a square. Then brushed the bread with melted butter. I fitted them into non-stick muffin trays, put some thin sliced ham in the bottom. Taking the advice from the video I cracked an egg for each, but drained most of the white off to use later, putting the yolk and a small amount of white onto the ham. Then a tablespoon of Bechamel sauce on top. I brushed the top of the bread muffin with extra melted butter and I used some grated cheese I had in the fridge to top them off and then put in the oven, 200deg C for 15 minutes (as I like my yolks a bit runny).

These were incredibly yummy.

They didn’t take long to make, and I kept the left-over sauce in the fridge and made more the following day for breakfast. 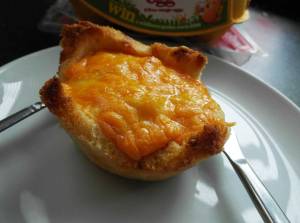